Here are the updates made to Shadow Arena during the maintenance on September 17, 2020 (Thu). 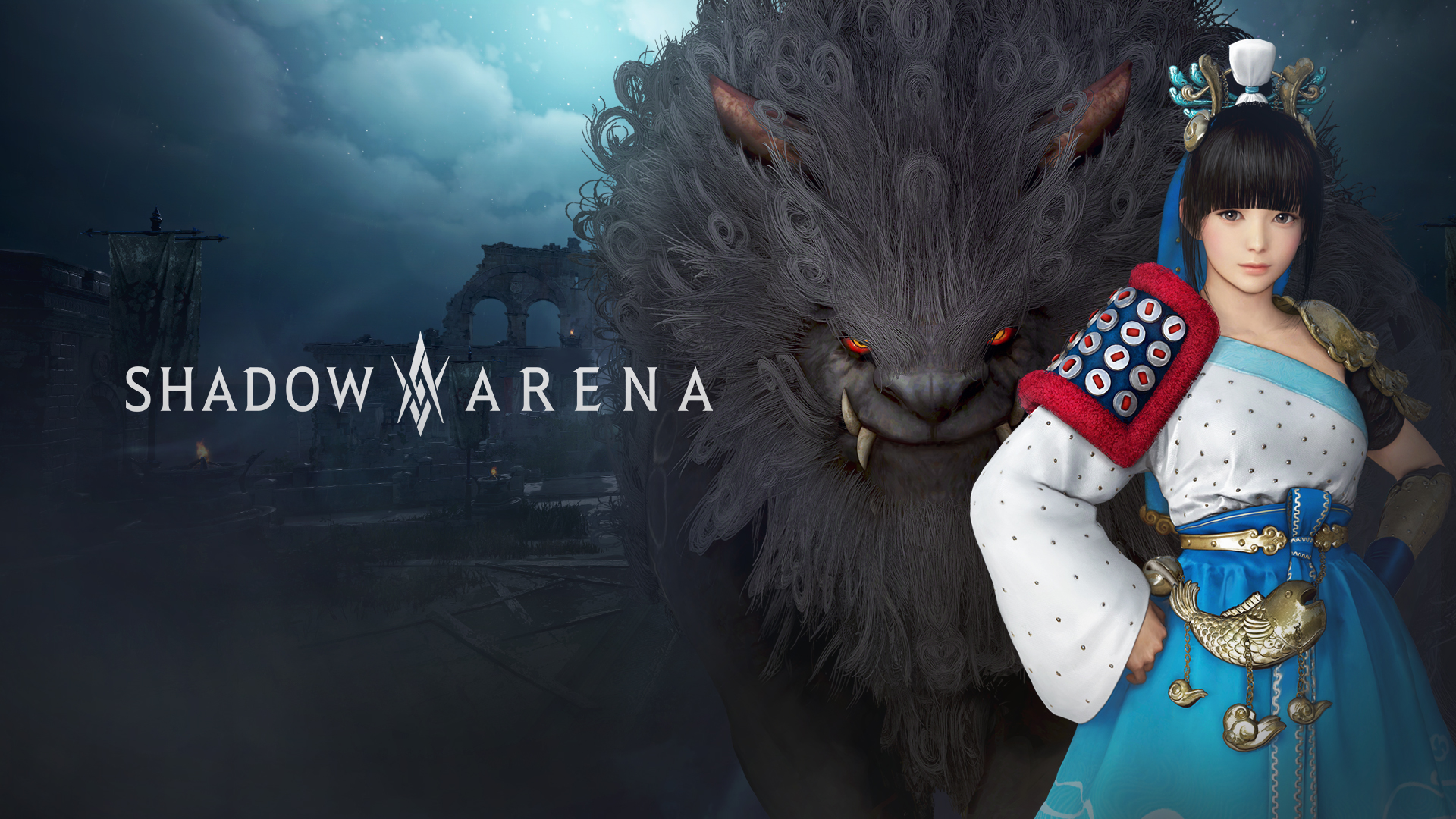 Ba-ri and Heilang is a duo Hero that fights together.

Heilang follows Ba-ri around and can be difficult to handle at times, but it is a reliable partner. It fights enemies by itself and continues to attack even when Ba-ri is stunned or knocked down.

Ba-ri is quick and able fight while riding on Heilang.

Ba-ri and Heilang have a completely unique style compared to the other Heroes we have, so we encourage everyone to try them!

> You can see the location of your teammates and pings on the minimap.

-  Changed the number of players needed to start Deathmatch from 2 players to 4 players.

> The game will start after a countdown when 4 or more players enter.

- Changed the time limit where players can join an on-going match.

- Changed the limit on number of kills in a match before other players’ entry are restricted to 27.

- Changed the background music when there is less than 5 minutes remaining in the match or when a team needs less than 10 kills to win.

- Increased the time that you can move around as Black Spirit when you die in Deathmatch from 5 seconds to 7 seconds.

- Enabled jumping as Black Spirit when you die in Deathmatch.

- Fixed an issue where 6 players could enter a team.

Penalty for Leaving a Match

- Added a penalty for leaving matches after it started.

> When you leave a match, you will be unable to join Deathmatch mode for a set period of time.

> How long you cannot join a match is determined by the number of times you left on-going matches and multiplying it by 5 minutes.

> The accumulated penalty will reset 1 hour after completing an entire match.

Thank you all for the feedback and suggestions regarding Deathmatch, a mode that was added last week. We made some quick improvements this week. Features such as Custom Deathmatches for forming teams or making the clan vs. clan format is currently in development, so please wait just a bit longer.

- Fixed an issue where you could not move immediately after using Dark Shift (Q) when there was a long chain of crowd control (CC) skills in King of the Hill and Deathmatch mode.

- Added a grave to be left behind when you die after the Blackstar awakens in the battle royale mode.

> This grave will be shown as an icon in the World Map and minimap.

- Fixed an issue where the visual effect does not show when you move around as Black Spirit after reviving during the Grace Period.

Now that the Preliminaries are over, we made some balance changes to Heroes that were too strong or too weak for the past few weeks.

We also added a new feature where a grave will be left behind when a player or bot dies. The graves will be visible on the maps. With this new feature, you can now see vital information of where the fights are happening to form tactical decisions.

- Fixed an issue where the smash attack happened right away when using Formation Break (3) going up to higher grounds.

- Increased the time required to perform another action when he misses his charging attacks by 0.2 seconds.

Shultz’s ability to pressure enemies with his charging attack and Gate Breaker (1) is very powerful. Not to mention, they were relatively safe to use. So, we decided to create an opening and increase the risk of the charging attack.

- Increased the cooldown at all levels by 1 second.

Haru specializes in powerful short combos. However, she was able to continue fighting after completing her full combo, because Heart Stab (1) had a short cooldown. Therefore, we decided to  increase its cooldown.

- Changed the skill so that it can be used longer by consuming stamina. It will not stop unless you click LMB or move to cancel it.

- Changed the skill description about maximum damage to 1.68 times to match its actual damage.

- Fixed an issue where party members were getting healed outside of range.

- Changed the skill description about the healing range to the following:

Herawen has been doing poorly ever since we nerfed her Fairy Flame (RMB) and Seed of Ice (1). Thus, we changed Thunder Viper (3) to give players the choice of continuing the spell by consuming stamina, which increases her damage capabilities.

(Using the skill for the regular amount of time does not consume stamina. It only does so when using it for a longer period.)

- Changed to damage all heroes in range when it explodes.

- Fixed an intermittent issue where basic attacks go out rooted in a spot when using them while sprint dashing on Endurance Stance.

- Fixed an issue where you stab in quick succession when you use a basic attack while sprint dashing on Endurance Stance.

- Reduced the knockdown duration from 2 seconds to 1.5 seconds.

- Fixed an issue where there is an invisible wall after the barrier is broken in Deathmatch mode.

- Fixed an issue where party members were getting healed outside of range.

- Added details about the healing range in the skill description.

Currently the four strongest Heroes are Shultz, Haru, Venslar, and Sura. So, we nerfed Venslar’s Radiant Pursuit (2) along with the nerfs on other Heroes.

Fixed an issue where the skill did not hit the target.

- Improved to attack while falling vertically by clicking LMB.

> Using W+LMB will have the same attack as before.

Lahn’s Nimbus Stride (4) had low uitility as it was difficult to aim the falling attack. Thus, we added the option to attack directly below so that you have more ways to hit the opponent.

- Changed the rocks’ HP to increase depending on Rockwind (3)’s level.

Earth Alchemy Stone (RMB) had low utility as it was easy to destroy the rocks. Thus, we changed the rocks’ HP to increase with Rockwind (3)’s level.

- Fixed an issue where the skill did not hit when attacking right above the target.

Thunder Strike was originally designed to be a skill with a small hitbox, but we found that the skill would miss during combos because of it. Thus, we slightly increased the hitbox of Thunder Strike.

- Changed the skill description of the Ultimate level to 7.8m to match the actual travel distance.

- Added in the skill description that you can attack quickly when clicking LMB.

- Decreased the damage of all levels of Blizzard (this skill’s Form) by 19.2%.

Blizzard (number 4’s form) is a skill that quickly closes a long distance, but it also had high damage and it left opponents little time to react. So, we nerfed its damage at all levels.

- Fixed an issue where icons of Sealed Relic Towers and Shadow Lords would keep moving then disappear without spawning.

We apologize for this issue. This bug has been fixed.

- Fixed an issue where Goblin Thieves were getting attacked (red visual effect) while casting their disappearing spell.

> Hero Score: The score affects your rankings. It is determined by your average kills, average score, and playtime.

> On the website, go to [Arena Board] - [Rankings] tab to check your Hero Score.

How good am I on this Hero? This is an intesresting question that we ask ourselves. This is especially true for players that have their own unique style for a particular Hero or for those that play a Hero that is rarely seen.

Hero Rankings will be calculated starting this week and it will be based on your match results when you play as a particular Hero.

- Restricted participants from chatting in la match where a tournament is in progress.

- Enabled selection of Heroes to progress through the tutorial.

> If you have 7 or more [Event] Skin Tickets from completing Daily Quests, you can get [Gerhard Shultz] Legendary Skeleton King skin.

> You can enter a raffle for physical goods, such as keyboard, mouse, and Shadow Arena merchandise, with [Event] Merch Ticket that you obtain from completing Daily Quests.

- [Free Hero Rotation] event has been extended until October 8, 2020 (Thu) before maintenance.

> You can use all heroes for free until before maintenance on October 8, 2020 (Thu).   > After the event ends, there will be set of 6 heroes available for free every week.

■ Other Fixes and Improvement

- Fixed an issue where the revival time shows as 4 minutes briefly when starting Solo or Team mode match.

- Changed all summons to disappear 10 seconds before the match begins in Solo, Team, and AI modes.

- Fixed an issue where the death sound is heard when pressing direction keys when spectating party member after dying in Team and AI mode.

- Restricted item acquisition from Loot selection in the game results screen when Loot Storage is full.

- Fixed an issue where you couldn’t select an item after the match ends when you entered the match with an item from a full Loot Storage.

- Added the Black Spirit voiceover in the tutorial dialogue.

- Fixed an issue where the voiceovers of opening chests and defeating an enemy for Tagahl, Igrid, and Sura overlapped.