Here are the updates made to Shadow Arena during the maintenance on June 24 (Thu).

- At the start of a match, party members will now be launched in the same direction without being attached to the party leader. This change fixes the issue where players were unable to move after the Black Spirit Jump.

- Fixed an issue where players could not be revived when killed in a duel or in the middle of the match.

- Fixed an issue where a monster's HP sometimes does not synchronize properly to reflect the actual amount when of HP when attacked by players.

- Fixed an issue in [Custom] > [Trio Mode] where the rest of the party was unable to exit the lobby if a party member exited the Main Lobby.

- Fixed an issue where Nimble Maneuver’s effect was not displayed in the information at the bottom left side of the screen at the start of the game.

- Changed to automatically set AI players as Jordine Ducas and Herawen by default if a player doesn’t choose the AI heroes in their party.

- Improved to show the hit effect on the HP bar above the enemy's head when they are attacked by players.

- Improved so that the message displayed at the top of the screen would have a temporary highlight effect.

- Basic control keys for Ping/ Chat Macro/ Activate Mouse are changed as below.

- Changed the description of the above shortcut keys in the Control Settings, Minimap Key Guide, and Tutorial.

- Added Activate Mouse key and Look Behind key to the Control Settings so that players could not to allow players to adjust them.

- Improved to allow players to set the shortcut keys with “Alt” from the Control Settings.

- Moved the position of target UI to the center of the screen. Due to this adjustment, the default position of the camera is slightly moved down.

In this update, we’ve fixed the Black Spirit jump issue, revive issue, HP bar synchronization, and some other major issues. Additionally, we’ve also implemented quality-of-life improvements and added a new hit effect. The new hit effect, which appears on the HP bar above the target, will provide feedback for hits, and also offer a more rewarding experience when players land their attacks. Furthermore, we set default keys for following in-game features: Ping, Chat Macro, and Activate Mouse, in the order of their importance. Of course, since players may have different preferences for shortcuts, so we’ve also provided the option to customize shortcut keys for all features in “Menu > Control Settings.”

> This item will be available through future events.

- Improved the UI to immediately display the dye players obtain from opening the dye box.

> From the Hero selection screen, go to the Mastery menu and choose the A or B type to use as your E skill.

- The following mastery skills have been added to each hero: 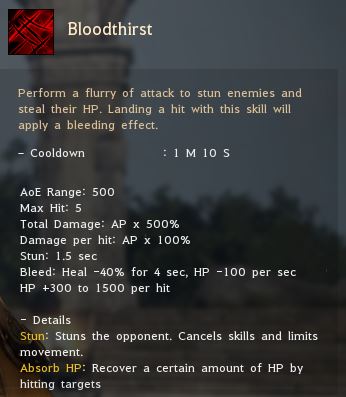 Bloodthirst is a skill with a slightly long casting time, but it incapacitates (stuns) enemies in front of you for 1.5 seconds and steals their HP. Bloodthirst is a good choice if none of your party members have skills with bleed effects, or if you need to recover your HP. If low damage output is a source of concern for you, Bloodthirst can be used in tandem with other skills to make up for that, since it can stun enemies and inflict up to 500% damage. The skill has a long cooldown due to its versatility; however, this is subject to change as we will continue to monitor how the new skill fares in battles.

- Fixed an issue where the Key Input Guide was not displayed.

- Fixed an issue where you could not use basic attacks when pressing S + LMB.

- Fixed an issue where the shoulder part of his “Blackstar’s Successor” skin was different from what was shown in the illustration.

- Fixed an issue where jumping forward with insufficient Stamina while sprinting would cause her to drop in place mid-air.

- Fixed an issue where her jump while under stealth would be slower than her normal jump.

Thanks to her skills giving her a long reach and lots of Super Armor, Haru is rather a difficult hero to contend with. Compared to other Brawler type heroes, who are not as capable in evasion, she also holds the highest basic AP.

Thus, you could say that Haru was not only specialized in assassination, but also strong during the early growth stage of the game and 1v1s. Making her too efficient all around. As a result, we lowered her base AP value, but kept her assassination utility to allow players to keep playing her in a hit-and-run method, but at a toned down state.

- Fixed an issue where the seed would not explode if you hit an enemy with the skill at a close range.

- Made improvements for an issue where the seed would explode at an incorrect location if the skill hit from a long range.

- Decreased the transition time between the first strike of his basic attack to his basic movement by approximately 0.31 sec.

- Decreased the transition time after the last strike of basic attack to other actions by approximately 0.31 sec.

- Decreased the transition time after consecutive lateral attacks to other actions by approximately 0.12 seconds.

- Decreased the transition time from casting Vice to other actions by approximately 0.22 seconds.

Badal’s strength lies in knocking down enemies and keeping the pressure up with consecutive combo attacks. To make the most out of this, Badal has to continuously use melee attacks in close range to enemies, which means putting himself in danger during team fights. So, we’ve given him improvements by significantly reducing the transition time after each attack skills to allow Badal to quickly evade while attacking and make his combos even faster than before.

- Fixed an issue where the Key Input Guide would not be displayed.

- Improved so that you can activate an additional attack if you input LMB after using the skill.

- Changed to longer switch you to Courage Stance when you use a Black Spirit Skill in Patience Stance.

- Changed a part of the skill description as follows.

> (Before) AP Decrease: Reduces certain amount of the opponent's AP

- Increased the damage of his basic attacks by 38%.

- Fixed an issue where the Key Input Guide was not displayed.

- Fixed an issue where the skill description omitted the part about Super Armor.

- Fixed an issue where the first dark cloud effect was not displayed in the opponent’s perspective.

- Improved the skill to teleport Heilang right behind Ba-Ri and start dashing.

> Before: Teleport 2m behind Ba-Ri

- Changed Heilang to dash towards exactly where Ba-Ri is facing if there is no targeted enemy.

- Fixed an issue where the visual effect during the hit animation would not be shown after the attack.

- Fixed an issue where the Key Input Guide would not be displayed.

- Decreased the speed of the laser projectile by 14.3%.

- Changed the laser that Wu-ju uses when transformed into a Laytenn to display a “preparing to fire laser” visual effect for 0.67 seconds.

- Increased the damage of basic attacks after transforming into a Laytenn by 33.3%.

- Increased the damage of jump attacks and laser attacks after transforming into a Laytenn by 50%.

- Changed the skill so that Super Armor would be applied right after using the skill.

> Before: Super Armor applied 0.06 seconds after casting the skill.

- Changed the skill’s animation as follows.

> Decreased the transition time after the attack to other actions by 0.42 seconds.

- Changed the skill so that Super Armor would be applied until right before the attack animation.

> Before: Super Armor applied during the entire attack animation.

- Fixed an issue where you were unable to obtain the rewards (Silver or Buffs) when you dealt the last bit of damage with the Crows.

There was a rather fatal issue where players were unable to obtain silver or buffs if they dealt the last blow with Frightening Crow. It took some time to identify the exact cause, but we are happy to report that the issue is finally solved with this update. We sincerely apologize to the players who experienced this issue.

- Changed her animation when dashing.

- Increased the damage by approximately 53%.

- Lowered the height of the wall that leads to the Windmill Village and the slope of the hill.

The Serendia Map currently has many terrain features like rocks, walls, and big trees that hinder a player’s movement. We are planning to improve these terrain features one by one. In particular, we’ll touch up often-used routes, such as the “walls of Windmill Village” that you cross on the way to reach the Shadow Knight Captains.

- Changed the amount of silver obtained for the number of spectators who watch you play when you win a match as follows.

> (Before) The number of spectators who watched your play x 20

→ (Now) The number of spectators who watched your play x 30

- Changed the Jump Gate to appear 30 seconds after the start of the match.

> Before: Appears immediately at the start of a match.

With the nerf to HP Potions, it became apparent that using multiple HP potions was rather costly considering how each potion costs 150 tokens. As a result, we’ve added the “Sandwich,” which is an item that can recover +3000 HP. Although it’s high amount of HP recovery lends itself to being useful at the later stages of a match, but you’ll need to cautious when using it since you are not able to perform other actions while eating it.

- Changed the effects of Elixir of Corruption as follows.

- Changed the purchase price of below items as follows.

- Changed how Blackstar Fragments are obtained in the Tutorial. (Obtained Fragments will now fill a gauge.)

> Before: Blackstar Fragments were immediately obtained when you approached them.

- Fixed an issue where the Fairy of Light in Tutorial would go through rocks.

- Changed the Tutorial to apply the skin you had equipped before entering the tutorial.

- Improved how the Black Spirit’s lines would appear when talking.

- Improved the Tutorial to automatically activate the mouse cursor once a Tutorial stage is completed.

- Updated the skill icon of Venslar’s Shield of Fortitude (RMB).

Click the link above to view the known issues that are currently being investigated by the developers. We are currently working to resolve these issues, and we will update players through linked page as soon as an issue is resolved.