I am Sung Jun Choi, the Lead Developer of Shadow Arena.

I am making my first appearance on a Dev Note. From the earliest stage of Shadow Arena’s development, I have been working with “Byulbram” Kwangsam Kim and still am actively developing the game while listening to the players.

As we have spent approximately 6 months together after the renewal, there emerged a handful of topics to be discussed. Today, I would like to address these topics with you.

First, I would like to discuss the future direction of our development.

The key points of our development plan are listed below.

For those of you who played our game for a long time, this decision may sound questionable. At the end of December 2020, we announced that we will operate “Trio Mode” as our main mode  to focus our content. In fact, we had been operating Trio Mode only for the past 6 months.

Nevertheless, we observed that Trio Mode brought down the game’s accessibility to an unmistakably lower level than we expected. Simply put, solo players were able to be auto-matched with AI players, but the fun of the game inevitably plummeted as you teamed up with other AI players. This took away the appeal of Shadow Arena from solo players greatly.

Now, with the Mastery System for all heroes completely updated and the rules of Trio Mode starting to take its final form, we have decided that it was time to prepare for Solo Mode once more. Needless to say, it would be revamped and polished from its previous format.

The Solo Mode currently in development is significantly distinct from Trio Mode in many aspects, but they can be narrowed down to two major points.

Players lost the will to fight when they fell behind in farming items or objects during the early stage of the game. So, they would not focus on playing the current match and think about making up for it in the next one. This also impacted the skilled players that were winning as it was not fun to fight against such players.

However, if we reduced the effectiveness of items too much, it would decrease the need to obtain items and progress during the early to mid-stage of the game. This then can lead to survival focused strategies becoming prevalent over stacking kills early.

Currently, we are trying various ways to find the perfect balance in the middle of these two extremes. We cannot give any details as to how this will be achieved at this point, but we will present them in the future.

You will be able to form an area where other players will not be able to enter.

This will be in a similar format to how Garden of Roses (A), an Ultimate skill of Ataraxia, is applied. The opponent will be unable to enter nor exit the until the area itself disappears. As long as the area is present, you will not have to worry about your opponent running away or other enemies jumping in. This area skill cannot be used infinitely, and there will be a limit on how many times it can be used per game.

Solo Mode is about 70% complete in its development. We will first apply it as Custom Mode where players can create a room and try for themselves once the first rendition of it is complete. As soon as we finalize our patch schedule, we will announce it through our Dev Note with more details.

With the Replay feature, you will be able to see how other player played in their exact gameplay screen. Of course, you can also review your own plays from a spectator’s viewpoint. However, you will now be able to see information that were exclusively known to the player as a spectator as well (ex: play screen, skill cooldown, KDA, number of tokens, etc.). The previous Spectator Mode only released limited information, since it could affect the match results in real time. The Replay feature, however, cannot affect the matches and therefore we included a vast array of information for the viewers to see.

Players could only obtain Tier points as rewards from matches at the moment. Therefore, we thought that players could use more to motivate them to play consecutive rounds.

The Support Shop will open after each round, and you may buy more support items with more if you have a lot of Tier Points. 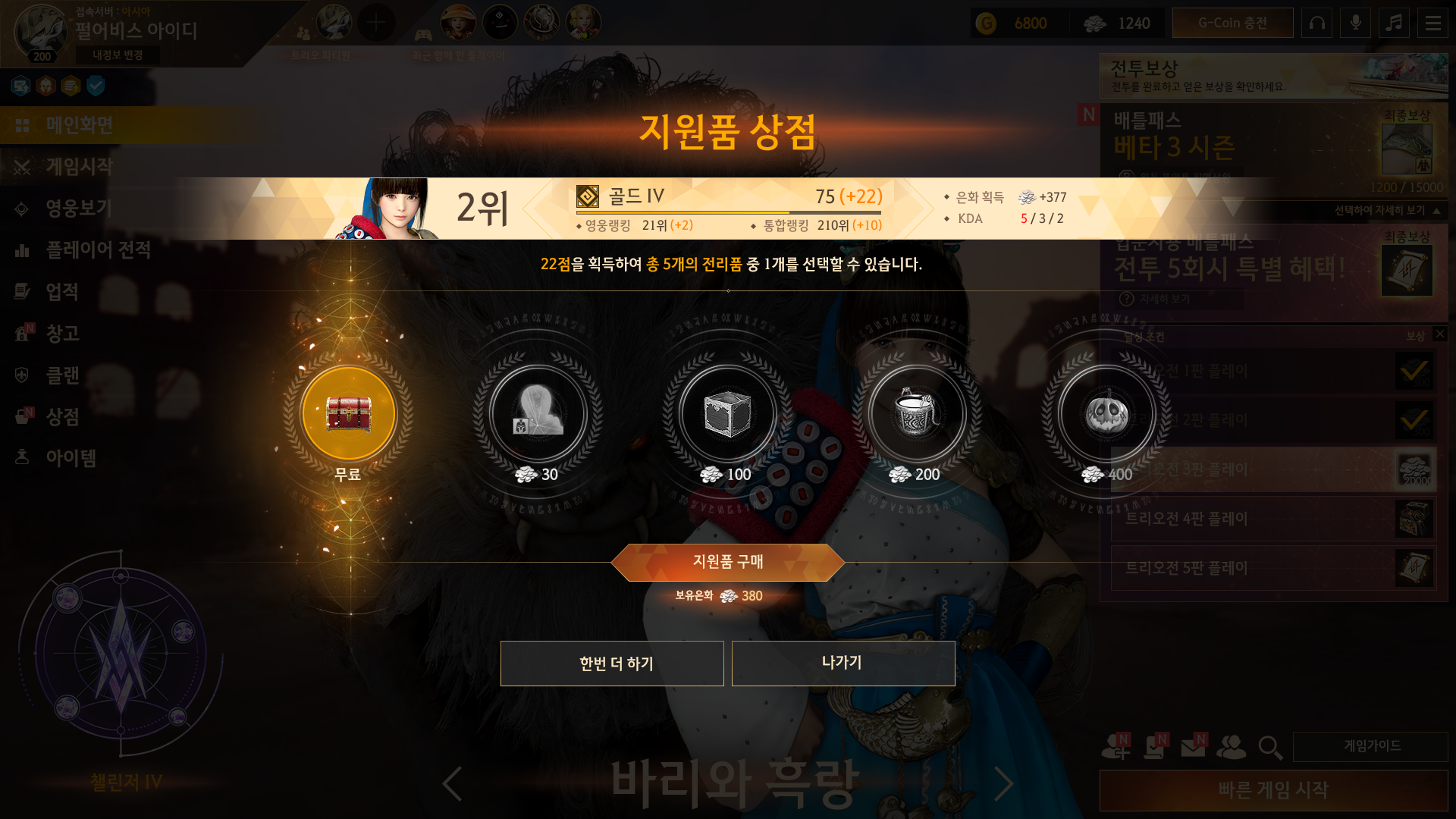 ▲ The image above shows UI that is currently under development. Please note that this is subject to change when it goes live.

With Tier Points that you obtained from each round, you can get more support items like Dye products, Skin Fragments, and Profile Icons for free or at lower than usual prices. If you are lucky enough, you would even be able to win a Special Hero Skin that cannot be found in anywhere else other than the Support Shop.

| Improvements in the Lobby Chat Window

Our thought on the current chat window is that it is quite inconvenient to use for communication. Since its size is small, players found it difficult to view all the information at once. In addition, players had to go to the main screen to re-open the chat window that was minimized, which was also an inconvenience.

▲ The image above shows the new UI that is currently under development. Please note that this is subject to change when it goes live.

The new chat window brings a number of improvements. Players can now open or close the chat window from any screen, view more messages, and have an easier time spotting new messages when the chat window has been minimized. Although not included in the image above, we plan to add a new 'All' tab that lets you see all messages (Channel/Friends/Party/Clan) at once.

In addition to the topics discussed above, we plan to improve the Clan feature, add more contents to Sparring Ground, customization option for each Hero, and raise the quality of the early stages of the game to make it more accessible for new players. We will share more details about these contents in the future.

Next, I’d like to discuss the issue that our players have continuously brought up. Some of these issues include the matching system, desync issue, not showing up for tournaments, and Mastery balance.

We plan to discuss more in depth about these issues next week. Moving forward, we will do our best to find ways to better communicate with our players.

Thank you for your continuous support for Shadow Arena.