Here are the updates made to Shadow Arena during the maintenance on December 9 (Thu).

- Fixed the issue where the Dark Shift control keys would occasionally not function under debuff effects.

- Fixed the issue where you would occasionally be trapped in terrain at the start of a game or when resurrecting and performing the black spirit Jump motion.

- Decreased the damage of basic and lateral attacks by 19.6%.

- Changed so when RMB is released, the Fallen Flower attack is performed and so stamina is recovered when performing basic attacks.

- Added a sprint jump attack to the Fallen Flower skill that can be performed when you run and consume stamina.

- Fixed so other than the stamina that is consumed for using skills, running consumes 10% more stamina.

| Bond Cut (RMB)
- Adjusted so consecutive hits would not be fired unless the skill key (RMB) was held down or if it was pressed late after performing 1st and 2nd hit attacks.
- Decreased the maximum damage by approximately 13% from 910% to 791%.

- Skill has been changed to the following.

> Changed the block motion to be very short and to attack immediately after it is performed.

> Attacks are fired even if enemy attacks are not blocked.

- Decreased the maximum damage by approximately 33%.

| Head Shot B (E)
- Decreased the projectile speed by approximately 25%.
- Increased the time until the attack is made when skill key (E) is not held down by approximately 0.25 sec.
- Added the actual damage value that is applied on the charge per level in the skill description.

- Improved by speeding up the motion of kick and upward slash.

- Improved by shortening the casting motion by approximately 10%.

- Increased the charge distance from 6m to 9m.

[Dev Note]
Yeonhwa’s strengths are her fast basic attacks and movement speed. However, it was determined that the current balance required an adjustment, so we decreased the damage of her basic attacks and increased the stamina required to perform Fallen Flower. To strengthen the traits of Clairvoyance B skill and to improve its usage as a skill, we decreased the skill’s cooldown on successful enemy attack blocks, so it could be used again almost immediately.

| Gate Breaker B (Q)
- Added the actual damage value and charge distance that is applied charge per level in the skill description.

| Thunderbolt Arrow (RMB)
- Removed the guard break and blowback effects from the skill.
- Added up to level 5 for the skill to be charged and changed so the knockdown effect is applied on all 1 to 5 levels.
- Changed the duration of the knockback effect applied for each level charged.

- Changed the damage per level to the following.

[Dev Note]
The ranged hero Orwen was a little too strong so we decreased her movement speed by 10% in comparison to other heroes.
Instead, Twin Fairy Arrow A and B will now grant beneficial effects such as attack speed and movement speed buffs, allowing the option to choose a preferred play style. In addition, changes were also made to the mechanism of skills that had lower usage.
In the case of Explosive Trap B, multiple traps can be placed like a barricade to block the enemy’s path, and pressing the skill key (RMB) again will detonate the traps at will.
As for Arrow Storm B, the second arrow will now fire in a straight line making it easier to hone in on the target at the cost of a shorter range. These changes will allow the skills to better fit the concept of a nimble hero who uses evasive maneuver skills to fight melee heroes and hope that it can be used to block the enemy’s path to widen their distance.

- Added the actual damage value and charge distance that is applied charge per level in the skill description.

| Take Off! (RMB)
- Added the actual damage value and attack range that is applied charge per level in the skill description.

- Improved so that the boomerang will explode immediately when you press Q again.

- Increased the casting speed by approximately 10%.

- Changed the targeted enemy to fly far away in the direction of where the attack was fired to when the fire boomerang explodes.

- Improved so you could immediately combo into another skill when the burning boomerang explodes.

- Improved to ride the boomerang faster after casting the skill.

-Improved so could immediately combo into another skill when the boomerang hits the target enemy.

We improved certain Mastery B skills as some of these skills had relatively lower usage compared to Mastery A skills.

For Thaw Winter B (Q), we improved its usage by adding the ability to quickly combo into another skill when the boomerang explodes and made changes so that if the skill key (Q) is pressed again, it summons the boomerang to explode immediately.

For Burning Hula Hoop B (Q), the cooldown was quite long for a skill that was not used as much. Therefore, we decreased the cooldown significantly and improved the skill so it can quickly be transitioned into another skill.

> However, invincibility is applied during the motion Jousting disappears when performing the dismount strike (RMB).
- Changed so that you fall of the horse when attacked by skills with a blowback effect.

- Changed the attack motion speed to play faster right before the stab attack.

- Increased the motion speed right before the attack is performed by 15%.

- Changed the speed of the smash attack motion after gathering the power of light by approximately 17%.

- Increased the duration of blowback effect from 0.9 sec to 1.5 sec.

[Dev Note]
After evaluating the balance for 2 weeks, it was determined that Jousting’s was a bit too strong, so we reduced her strength. In addition, we made improvements to Righteous Torment B and Retribution B, Wave of Light A skills as they had lower usage compared to other Mastery skills.

- Fixed the issue where the deleted friend’s profile effect was displayed on the friend list.

- Improved the friend’s online status to be updated regularly in real-time in the main lobby.

- Improved the Mastery selection screen by enlarging the size of the screen.

- Improved so the mastery icon is updated accordingly to the selected mastery.

- Changed the main lobby music to match the Christmas atmosphere. 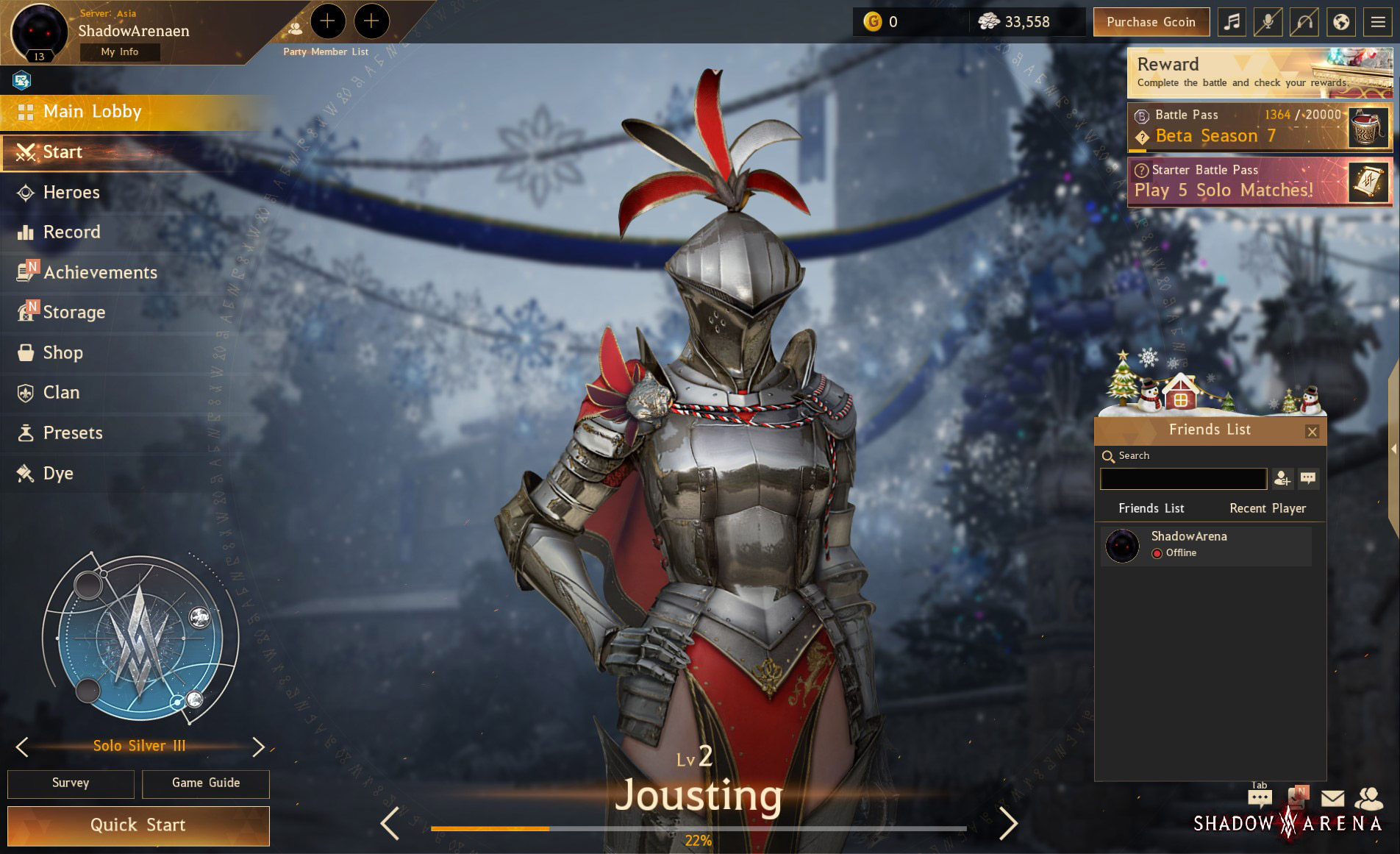 - The [All Heroes free to play!] event has started.

> The new hero “Jousting” is included in the rotation as well, so don’t miss out on this special hero rotation event!

- Improved the skill icon on the [Overview] > [Heroes] page.

* The fixes and improvements listed below were applied during the December 8 (Wed) maintenance made on the Pearl Abyss website.

- Changed the icon displayed on the Account Information page in the Parental Controls section when the controls are activated.

- Fixed the issue where the question-mark icon displayed on the lower portion of the OTP backup code page would sometimes appear in an abnormal location.