Here are the updates made to Shadow Arena during the maintenance on June 23 (Tue).

- Changed the way enemy Hero names are displayed in Ranked/Normal matches to include numbers.

- Added an option to show or hide player nicknames when creating a match in Custom mode.

> This option displays the player’s name as their nickname in the left-side UI when defeating them.

In last week’s update on June 18 (Thu), we added a feature to hide other players’ nicknames, but this made it difficult to determine which players were threats, so we’ve added an identifying number to the end of the Hero names.

Additionally, we’ve added the ability to choose to hide player nicknames and display Hero names or just show nicknames like before in Custom mode.

> AI Bots will not attack each other in Team mode.

To help games get started, we’ve added AI Bots to Team mode as well. However, the AI Bots will not attack each other and only attack players just like in Hardcore mode for AI matches, so if there’s too many AI Bots still surviving at the later stages, they can be quite dangerous.

- The Sparring Grounds map has been made larger than before and changed to spawn Sparring Specters and Ancient Weapons (Laytenn/Puturum).

> Placed Sparring Specters and Ancient Weapons to practice with around the Sparring Grounds map.

> The Sparring Specters do not attack and if you die, you can revive at your original location.

> Laytenn and Puturum’s HP will not automatically deplete, and if it dies or disappears after you dismount by press R, it will revive at the original location.

> Expanded the number of players that can enter the Sparring Grounds to 100.

We’ve started our overhaul of the Sparring Grounds.

These are our first adjustments, and we’ll continue to introduce additional features in the future.

- Changed combining items for a higher-grade item to no longer cause a Cheering action.

- Unified the appearance of equipped weapons.

> Equipping a different weapon will no longer change the appearance.

- Changed Back Attacks to no longer register when a Hero is standing back up after being knocked down.

Moving and attacking a foe who is standing back up after being knock down to hit them with Back Attacks not only isn’t every intuitive, but it’s a system that creates a major gap in combo damage between players who understand it and players who don’t. So, we’ve changed this to make it more intuitive for all players.

- Performing a skill after using a Sprinting Jump Attack will now be 1 second slower than before.

- Sausan’s Tremble (3): Fixed an issue with the skill description incorrectly displayed the knockdown time as 1 second instead of 0.5 second.

- Decreased the attack range of the sprinting jump attack by 25%.

We increased the time to combo a skill after a sprinting jump attack as it allowed the use of Gate Breaker (1) with almost no drawbacks and allowing the use of a powerful combo afterwards.

> Decreased the knockdown effect from 1.5 seconds to 0.9 seconds.

> Re-changed the delay for performing another action after the skill’s additional strike. (Reverted 6/23 (Tue) Update change.)

> Decreased the mark damage by 8%.

We’ve reverted the previous Uproot (2) change to make it possible to follow up with a combo again. (As a result of reverting this change, a problem where using Thunder Rip (3) after the additional hit of a forward Uproot (2) sometimes does not combo well has returned, so we’ll fix this soon.) In return, we’ve slowed the activation speed for the Super Armor/Invincibility effect of Thunder Rip (3).

> Increased the damage of the additional hit by 3 times than before.

> Fixed an issue where the max damage was incorrectly displayed as lower.

We’ve increased the damage of Thunder Viper’s (3) additional hit that you could perform with LMB. Also, we’ve fixed a skill description to show the correct max damage, since it was incorrectly shown as being lower.

> Decreased the hit area of the stab attack after dashing by 25%.

> Adjusted the attack range as follows.

> Lowered the height the camera went up immediately after activating the skill and changed the camera to no longer be able to rotate left or right during the attack portion.

Even though we made a first pass of adjustments for Radiant Pursuit – Courage Stance (2) on Tuesday (June 23rd), the skill remained too strong, so we’ve nerfed it again. As for Light’s Judgement – Courage Stance (4), even though the skill has an excessively large range, players could also change the attack’s location up until it activated to fool opponents with the mark that appeared on the ground, so we’ve adjusted the range and time you had to adjust the aim direction.

- Changed the Hungry Black Spirit to now appear after you’ve spent 10 seconds in the Dark Fog.

While we did intend for the strategy of ducking in and out of the Dark Fog, it also resulted in it not being that risky to stay out in the Dark Fog for a long time. Now though, if you go into the Dark Fog for a short time you won’t take that much damage since the Hungry Black Spirit won’t appear but lingering outside for longer time will result in some serious damage.

> During the event, the silver you can earn from Solo/Team/AI matches will be increased by 3 times.

▶ Go to the Event Page 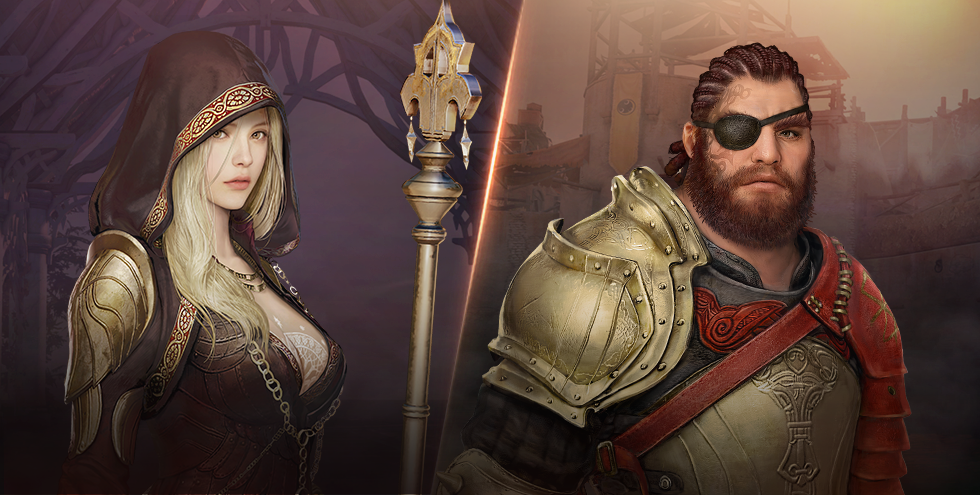 - Added the “Shadow Lord” skins that can be bought after reaching Lv. 10 Mastery for the Hero.

- The average player tier will now be displayed on the left-side of the screen when you transform into a Black Spirit after the game start countdown.

- Fixed an issue where the location of party members that was displayed on the compass didn’t match with their actual location.

-  Changed the design that was displayed for the stored items that were selected in the Loot Storage.

- Changed the text in the confirmation window that appeared when reporting another player.

- Improved upon an issue where noises could be heard when voices started playing after the selecting the “Enable / Disable Push to Talk.” option

-  Fixed an issue where voice chat wasn’t possible before the start of the game after entering an AI match.

- Fixed the issue where the party member UI would not refresh properly after changing party voice chat settings.

- Improved the Custom mode create and join window to close when a different button is pressed.

- Improved the Create and Refresh buttons in Custom mode to adjust accordingly to each language.

- Fixed the font with Simplified and Traditional Chinese to display in the correct sizes on the gameplay screen.