Earlier, we announced the direction changes we have been preparing and the thoughts behind them.

So, to start this off, we would like to send our deepest gratitude to the players who have waited for us regardless of the sudden decision.

Thank you all so much for the heartfelt comments and generous support.

As we announced before, the two concepts we were heavily focusing on were “simple” and “tactical.”

We have shared sneak peeks of the renewed Shadow Arena little by little through our official Discord channels.

But today, we would like to share some specifics about the direction we are going and how those will be implemented in-game.

- “The game is too hard.” These were the words we heard the most from new players. Getting familiar with the skills is hard in Shadow Arena.

Not to mention the combos they needed learn as well. It took too much time and effort to get used to the gameplay. Accordingly, we are planning to improve game accessibility by working on the following points.

As there were too many skills for the players to learn, we are planning to decrease the number of skills to 4 (including RMB). This will make it easier for new players to enjoy the game and lessen the burden of learning all the combo variations. Instead, we are reducing cooldown significanly on all the skills to keep it fun and active.

Going a step further from changing skill keys, skill casting times will be minimized so that the attacks go out immediately after pressing the keys. This will enhance the sense of control players feel over their Hero. 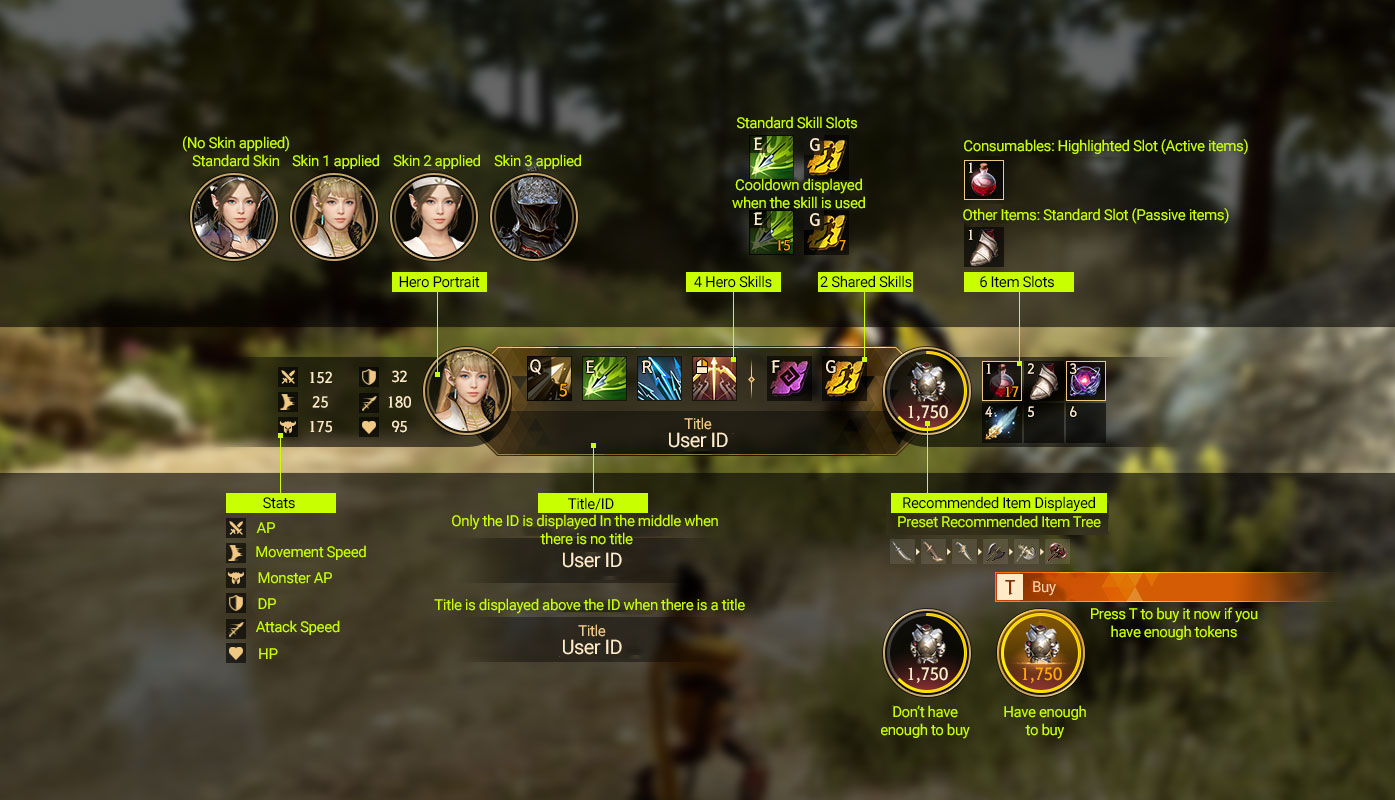 ▲ Changes are being made to make the information easier to access and understand. The above image is only for reference and is subject to change.

- The original Shadow Arena had various modes to enjoy and multiple objectives. However, this also made Shadow Arena less intuitive and difficult for players to focus on a content.

As such, we are planning to strengthen intuitiveness for players so that they can play without needing to see a guide or a detailed explanation.

Originally, it was difficult trying to learn all the strategies and roles of heroes for each mode. In the renewed Shadow Arena, we will focus on one mode - “Trio Mode.”

However, the other modes will still be available for our players to enjoyed through the “Custom Mode.”

Unlike before where players had to think about multiple objectives, (like boss monsters and others) we are planning to simplify by focusing on the “Shop” and “party buffs.” Players will earn “tokens” by defeating monsters and other players to purchase gear and items with desired effects to progress their Hero.

We are planning to make characters stand out more from the enviroment, as well as improving the visibility of the attacks, hits, and crowd control effects.

Aside from these features, we are planning on adding various filters to lower the strain on players’ eyes by decreasing the intensity of visual effects.

We are also working on a colorblind mode for red-green color blindness to be implemented in the future. 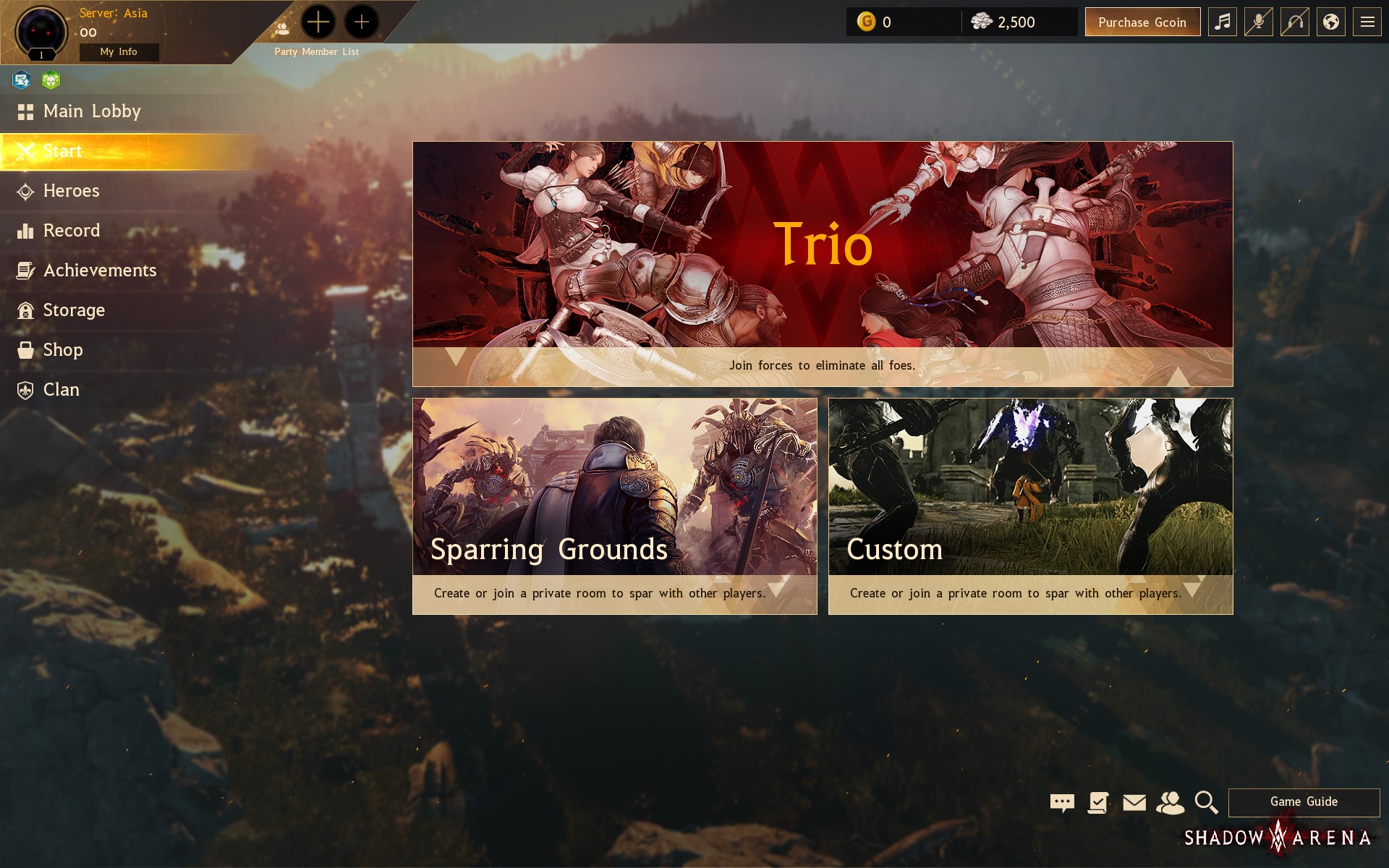 ▲ Simplifing Play Modes, the above image is only for reference and is subject to change. 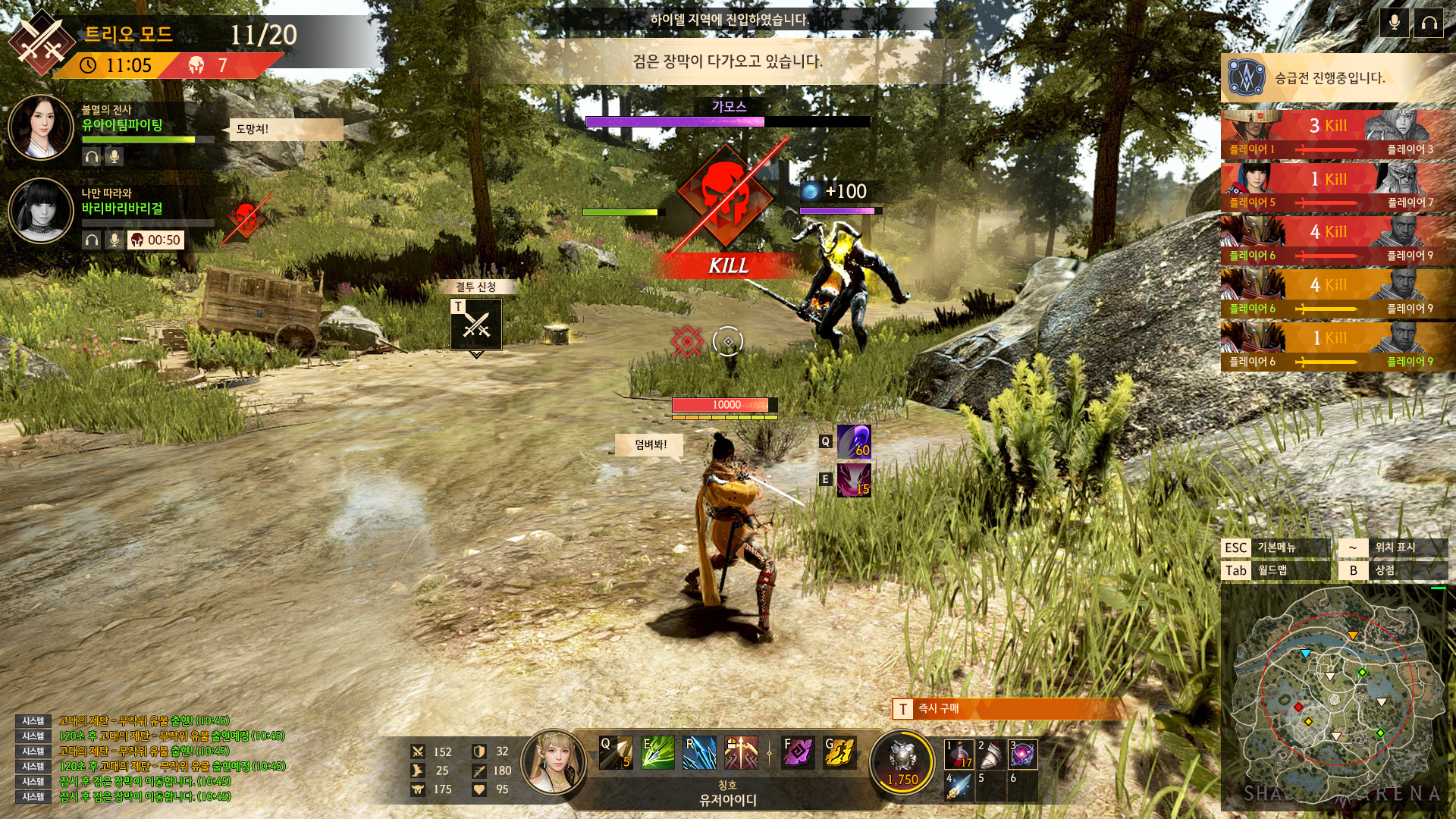 ▲ Improving visibility, the above image is only for reference and is subject to change.

We are planning to create distinguishing concepts and roles for Heroes like assassins, tanks, melee/ranged dealers, and mobility.

Example 1. Haru will now be given the assassin role. Her skill set is best suited for hit & run tactics. So her skills will have minimal casting times and we increased her stealthing speed so that she can maneuver in and out of fights easily.

Example 2. Herawen will now be given the support role. Her skill set will contain abilities with AoE heal, healing overtime, and more. This in effect will make her a Hero specilized in healing.

As such, we are expecting the gameplay to heavily rely on building strategies on how to combine and use Heroes.

ㅣ Shop System
Depending on the team, players can choose to progress in a specific direction they want by purchasing items that give the stats they need like AP, DP, Movement Speed, Attack Speed, HP, etc.

Players can choose to maximize their Hero’s specialty, supplement their weakness, or try unique combinations of items with their Heroes. We hope to see players try creative strategies with the Shop in the future. 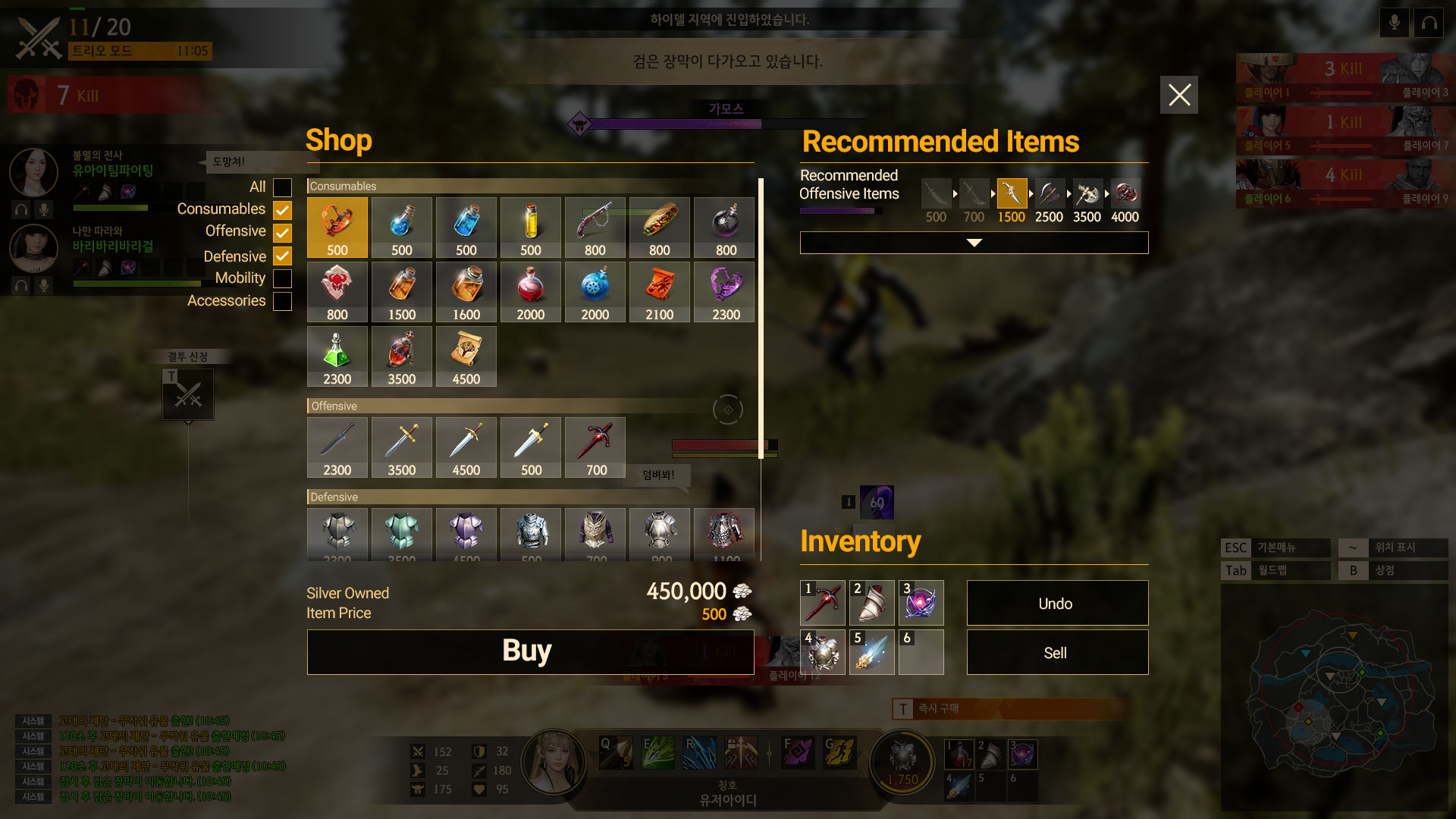 ▲ The shop, the above image is only for reference and is subject to change.

Additionally, consumables other than HP Potions may be removed. (Updated)

We had various and thoughtful discussions about farming and continue to discuss this topic even till now. Especially in the battle royale genre, farming gets dull.

As such, we had numerous internal discussions to improve on this aspect of Shadow Arena.

The consensus right now is to “greatly shorten” farming time. The reason behind the addition of the shop is a major part of this effort.

Starting off, we have abandoned the old system of having to farm to get higher grade gear to greatly shorten the necessary farming time.

We are also decreasing the penalty of dying. Players will no longer lose gear or tokens upon death.

This will help lessen farm time and the gap between other surviving players.

Currently, we are testing to see how we can improve the game to reduce the necessary farming time even more.

We shrunk down the map size significantly as well so that teams can meet more often and fight over objectives in the mid/late game.

We are also considering different mechanics to add to keep the match interesting. 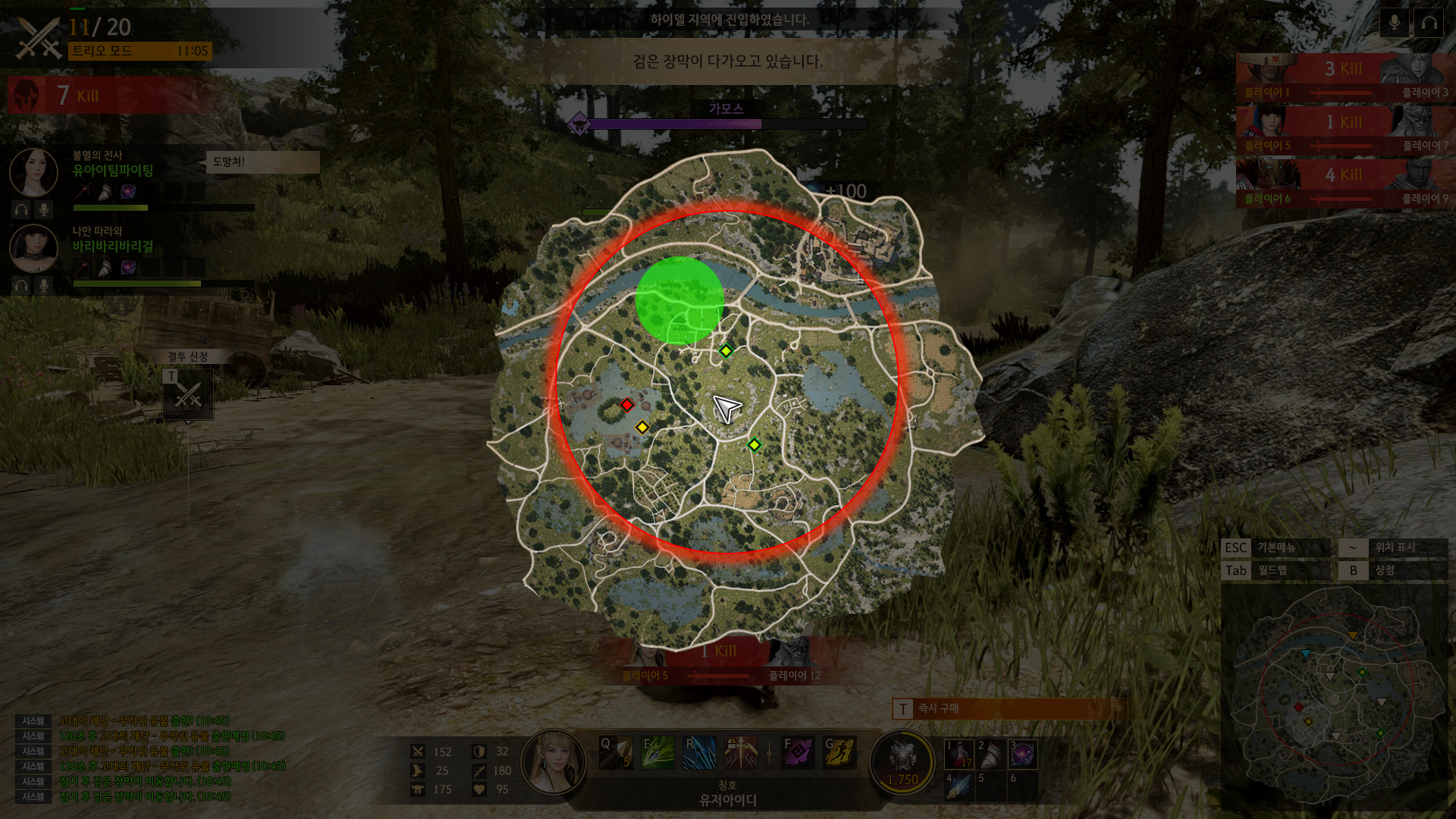 ▲ Shrinking down the map size, the above image is only for reference and is subject to change.

Additionally, we are distinguishing regions even further by concentrating beneficial factors and rare monsters to appear only in specific areas.

We are also adding mechanics where players can get random buffs or bonus tokens by defeating monsters. This will help increase players choices while farming.

Various shared skills other than Blink and Dark Shift will be added. This means that players will be able to select 2 shared skills to bring into a match.

It’s too early to tell you the details, but players will be able to make strategic choices by selecting offensive, defensive, or utility shared skills.

We are striving to transform the “foundation” of Shadow Arena, but we are also fighting against the physical constrain of time.

Therefore, we can only share the big picture as of this moment. There are details that still need to be fleshed out.

However, we are working hard to make it possible for our players to test the renewed Shadow Arena by early January.

We feel that our players have waited a long time to see the renewed Shadow Arena and we would like to get feedback on the current development changes as soon as possible.

Throughout this process, we will strive to collect opinions proactively and notify our players about development and game service directions through the official website and Discord channels.

As Shadow Arena goes through this transformation, we ask for our players continued interest and support. We will do our best to make Shadow Arena fun with a fresh new look.